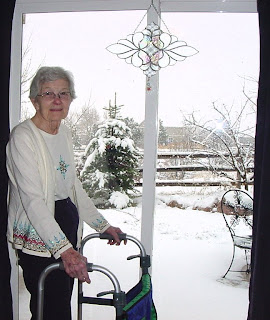 Today we celebrate the miracle of Resurrection -- our promise of life after death! Jesus is alive today and living in heaven. Some day (maybe soon) he'll return to earth, and His saints (that's us!) will reign on earth with Him for a thousand years. Then comes Armaggedon, and He wins. Then we'll get to enjoy a brand new heaven and earth for eternity. That's a lot to celebrate!!
George braved the morning snowfall to drive to church service in Falcon (about 15 minutes out on the plains from here). The snow didn't quit, so Mother and I stayed home and watched Charles Stanley's sermon on TV.
Posted by George & Madeline at 2:58 PM No comments: 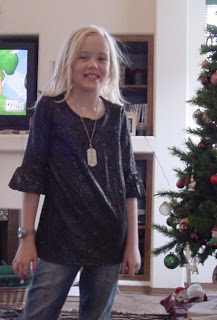 Another March birthday belongs to Olivia Jane, who turned 10!!
She's the 2nd daughter of Julie and Jon (out of four).
Congratulations to our beautiful Olivia!
We Love You!
P.S. That's a "travel bug" necklace she's wearing, a gift from her Uncle Daniel, who is into geocaching (look it up).
Posted by George & Madeline at 2:49 PM No comments: 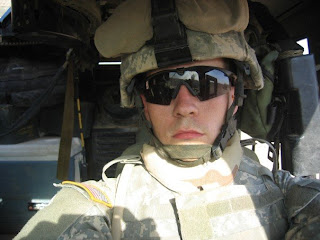 Kit turned 33 on March 9th. This year he "celebrated" his birthday at Camp Striker, just outside Baghdad, Iraq. He managed to get through the day without any of his soldier buddies knowing it was his birthday, so he didn't have to do 33 push-ups for them. The "care package" we sent didn't make it there until a week later.
Kit is a medic in his second tour of duty in Iraq. The first time he went, 2 years ago, he has in Ramadi, in the Anbar Province. He was assigned as medic for an army Cavalry reconnoissance unit that went out mostly at night. He earned his gold spurs with that group (a Cavalry honor) for a battle situation in Baghdad where his unit was surrounded in a house and pinned down until the Marines could rescue them.
He then spent 14 months based in Baumholder, Germany. While there, he earned his silver spurs by surviving a grueling Spur Ride challenge (another Cavalry tradition--look it up).
This time in Iraq, he has mostly worked in medical clinics, though he spent three months with a supply convoy unit, and he helped guard a desert outpost tower for a few weeks. His current 14-month Iraq tour is almost over. He'll return to Germany to finish his 4 year commitment, then come home to Colorado in November. We are all eagerly awaiting that day. His plans are to go to college, work as an EMT, climb Colorado 14ers, and stay in Colorado the rest of his life.
Posted by George & Madeline at 2:17 PM No comments:

George & Madeline
George's last job before retiring was Fatherhood Coach for Head Start and the Center on Fathering. Madeline was Senior Editor of Adult Bible Curriculum for Community Bible Study for 6 years, retiring in 2012.