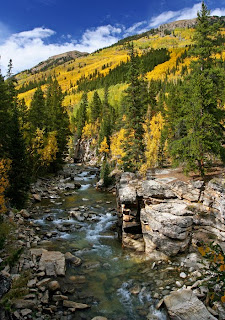 Summer is waning. We should have a beautiful day today with intense Fall sunlight and slight breezes with teasing hints of the cold to come. Tomorrow we move into October, when cold weather begins to dominate. Right on time, a new cold front is supposed to reach down into the state. The colors of turning trees and shrubs are striking down here (at a mere 6,000 ft.) where the Great Plains hit the Rockies, but are even more beautiful as they wash across the mountains. This photo was taken near Leadville last week.
November 5th is the day that Christopher (Kit) leaves his army post in Germany, released from active duty. He'll be home for the holidays. He hasn't made any decisions on where he'll go to college, but that's the plan. He probably just wants to enjoy his freedom for a while -- and I know he wants to enjoy being in the U.S. too. He's seen how much that means during his time in Iraq and Europe.
Our youngest granddaughter, Georgia, had her 6th birthday on August 29th, and George had his 67th one month later. What an interesting perspective one achieves with age -- looking back at one generation still represented before us (my mother), seeing where our generation has arrived at, and looking at the lives of our grown children and their young children. Though we all grew up in the same country, our cultural experiences are so very different!
Daniel returned to San Francisco from Southeast Asia in August. He has spent much of his time trying to figure out and put together all the required paperwork for Tien's visa. It looks now as though she won't be here until 2010 -- early in the year, we hope. We have enjoyed getting to know her a little from afar, and we think she's delightful.
Posted by George & Madeline at 6:27 AM

George & Madeline
George's last job before retiring was Fatherhood Coach for Head Start and the Center on Fathering. Madeline was Senior Editor of Adult Bible Curriculum for Community Bible Study for 6 years, retiring in 2012.